The latest work being done as part of Krestianstvo SDK research effort was presented at the Future Programming Workshop at SPLASH 2014, Portland (Oregon, United States). The full program is here

The Virtual World Framework (VWF) provides a synchronized collaborative 3D environment for the web browser. Continuing the OpenCroquet research effort, VWF allows easy application creation, and provides a simple interface to allow multiple users to interact with the state of the application that is synchronized across clients, using the notion of virtual time. A VWF application is made up of prototype components, which are programmed in JavaScript, that allows a shared code and behaviours used in distributed computation, to be modified at runtime. OMeta is a new object-oriented language for pattern matching. It is based on a variant of Parsing Expression Grammars (PEGs) which have been extended to handle arbitrary data types. OMeta's general-purpose pattern matching facilities provide a natural and convenient way for programmers to implement tokenizers, parsers, visitors, and tree transformers. The integration will allow to define on any VWF component it's own language grammar and replicate it through the application instances, then have a running scripts based on that shared grammar for that component. For example, one could have all the languages down from Logo (Turtle graphics) to Smalltalk available for scripting the virtual world just in the Web browser.

The talk contains examples of collaborative programming of distributed objects with user defined grammars. These objects could exist alongside with each other in the same replicated virtual world, being programmed on quite different languages, but holding the same simulation. 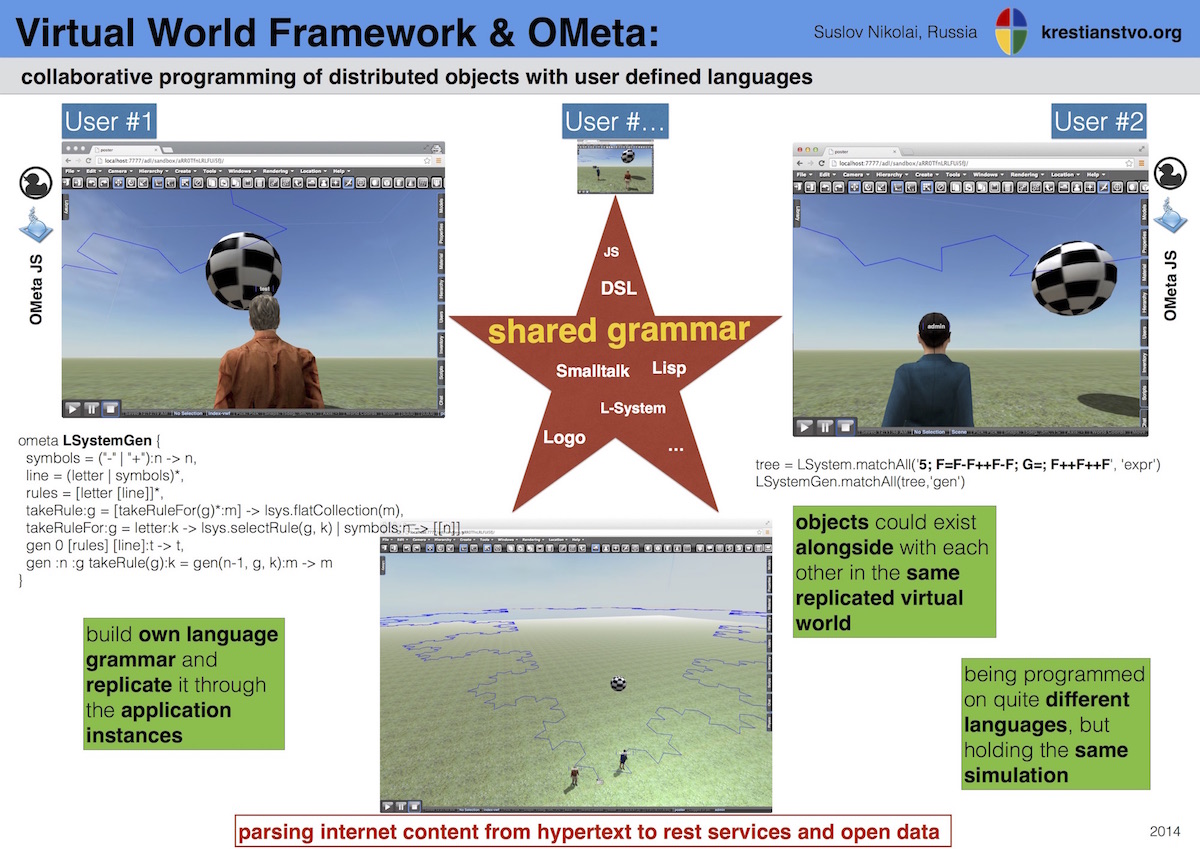 The project introduces the **Curved Space Explorer for Squeak project**, known as CCSE by Krestianstvo SDK.

It is a Smalltalk port version of Curved Spaces, originally developed by Jeff Weeks (http://www.geometrygames.org) in C language. This Squeak version is derived from Krestianstvo SDK project's version, where Curved Space Explorer is collaborative in it's nature and available mainly for distributed computation. The aim of this project is to make Curved Space Explorer being available for the large Smalltalk audience and mainstream Squeak distribution, so that anybody interested could work with it.

The project is Open Source and the code is available here: http://sdk.krestianstvo.org/sdk/ccse.html

The instructions are here: http://nsuslovi.blogspot.com/2013/07/curved-space-explorer-for-squeak.html

CAVE is built up with 5 computers, running Krestianstvo SDK 2.0 (OpenQwaq based) image on each. Head tracking is avaliable through Microsoft Kinect. CAVE implementation is based on Daniel Faken work. 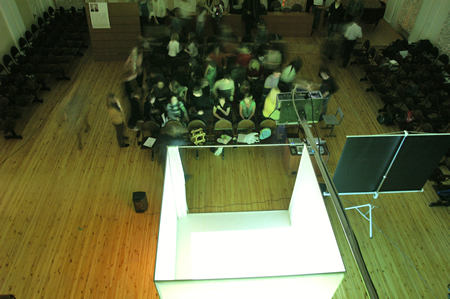 Visitors control the lights with movements of their bodys.

Creating music in movement by interacting with people and architectural objects in realtime.

Video shows the Man'J chair prototype with built in Ultrasonic sensor, controlled by Arduino board, Krestianstvo SDK and Supercollider.

Realization on the base of: Strelka: Institute for Media Architecture and Design (Russia, Moscow)

It is pure Open Source project, so that everybody could try it by themselves, after downloading the SDK. This video shows, how Collaborative Curved Space Explorer works with Flat, Hyperbolic and Spherical spaces in multi-user mode being installed on the one shared replicated virtual world (island). 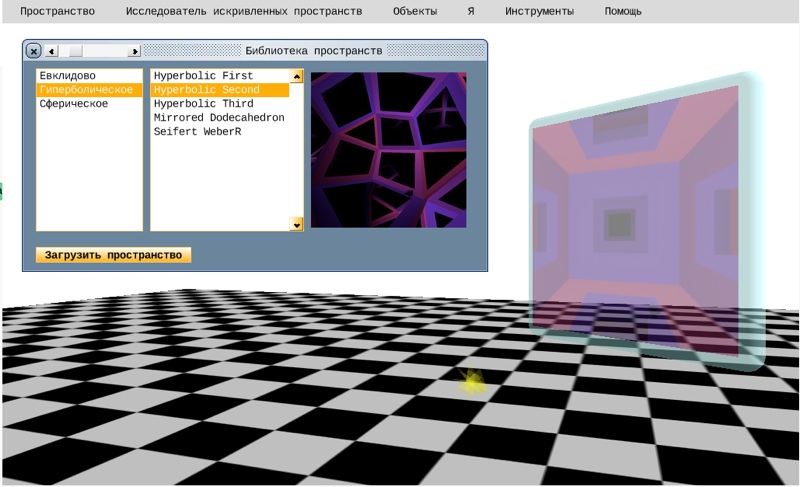 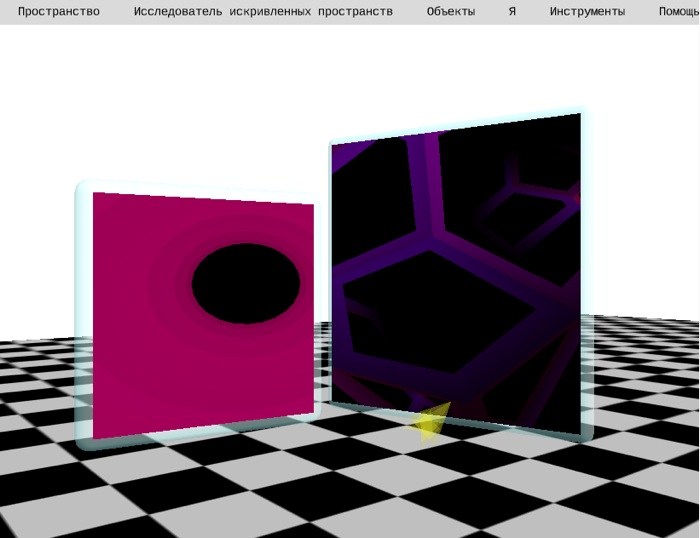 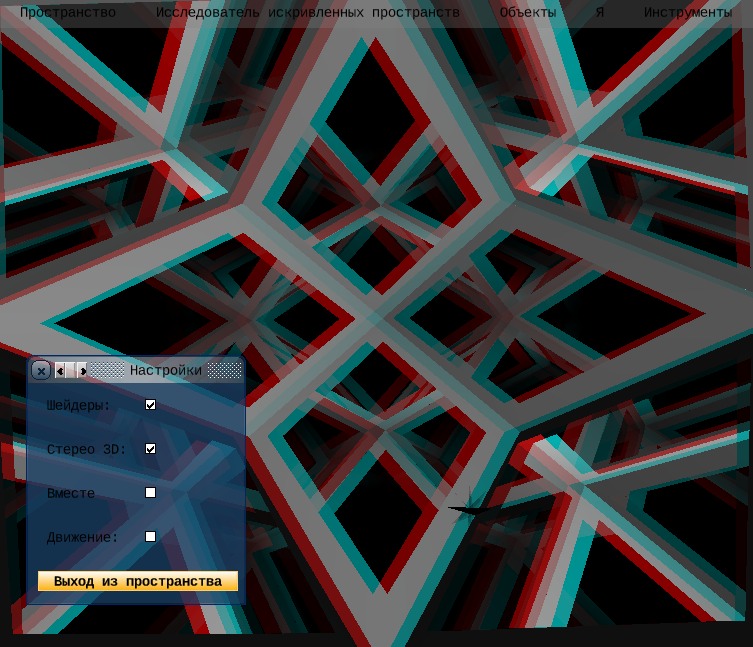 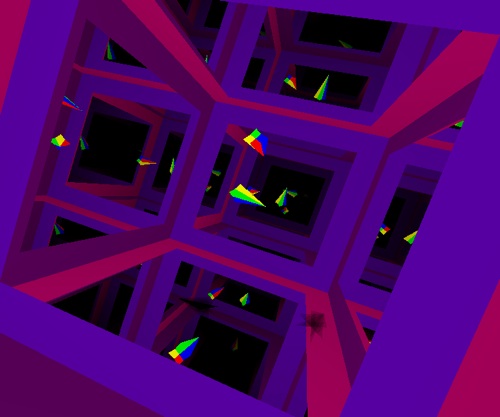 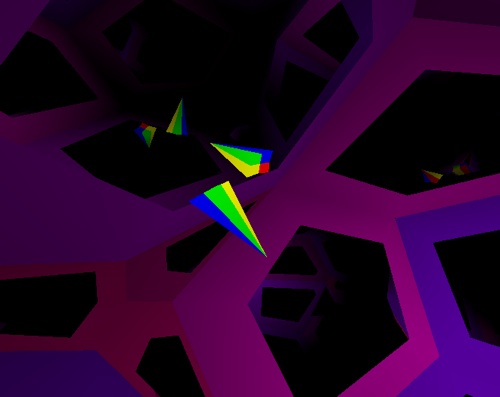 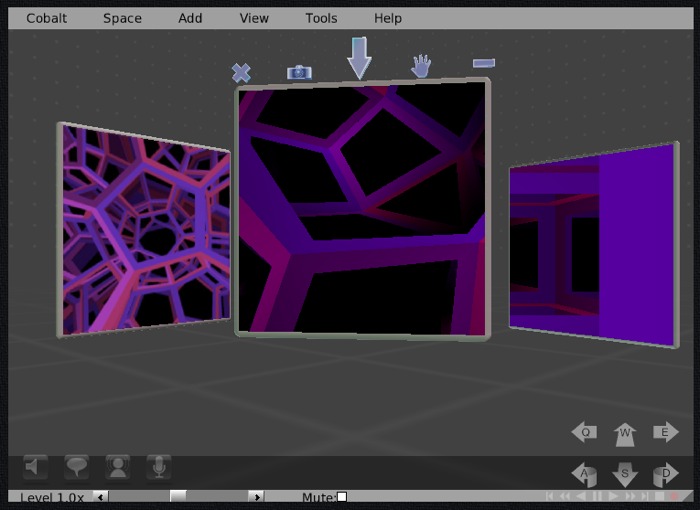 Art installation "A.Ivanov Bible sketches" was held at Russia State Tretyakov Gallery.
In the art installation I tried to connect the real space of 3 walls with its virtual projections in 3D. All installation is rendered by 3 computers (one per wall) connected in network with running Smalltalk Croquet/Krestianstvo image on every machine (scalable to any number of walls/projections). 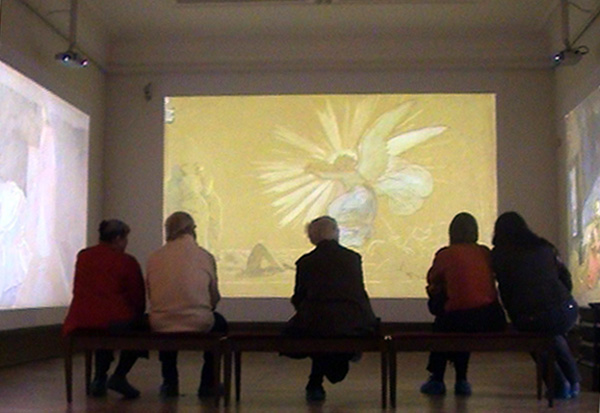 So the artist gets the full featured connected virtual/real space to manipulate with. For example: it is easy to model the real world scene lightning ( transitions and effects with color, moving the computer generated light source in the space of real walls); geometry transformations (dividing, adding new virtual walls); projecting video/3d animations/images synchronously; and so on.

Multimedia CD on art "A.Ivanov Watercolor. Graphics. Bible sketches" was published at Russia State Tretyakov Gallery.
The software for the disc was developed entirely on Smalltalk Squeak and heavily uses Seaside, Pier and Magritte meta-model.
It partly represents a complete Squeak app, that runs from CD-ROM without install, as user is needed to run the portable Web Browser for working with GUI. 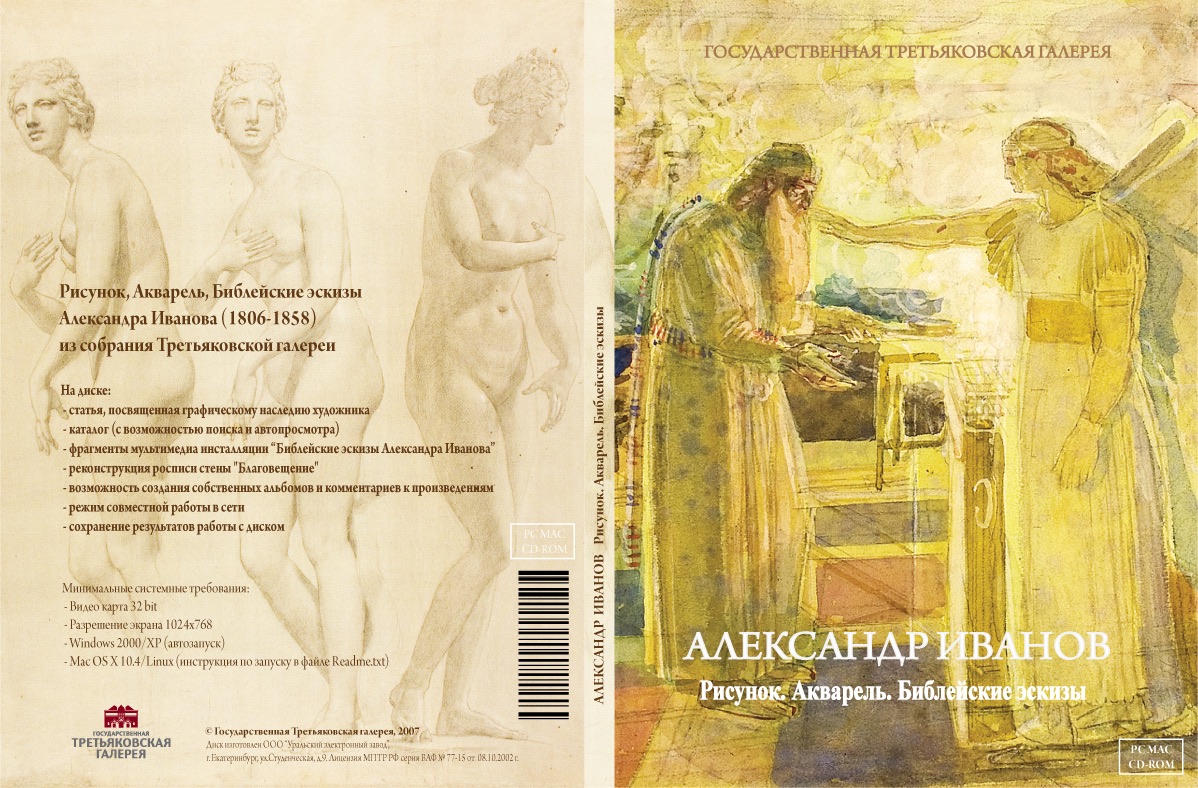 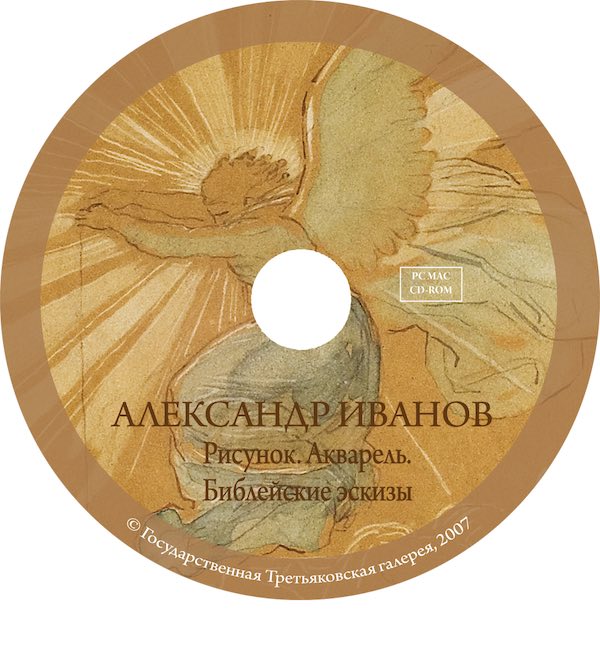 The disc allows to work with the content as one or an unlimited number of users simultaneously through a local network or the Internet; create annotations for works, create new albums and save them directly in the disk structure; there is built-in full-text search support. The disk does not require installation, it starts from CD-Rom or portable media and works by analogy with a Web server / object-oriented database.

Multimedia CD on art "Whistler and Russia" was published at Russia State Tretyakov Gallery.
The software for the disc was developed entirely on Smalltalk Squeak/Tweak and heavily uses Sophie's XUL programming interface for GUI.
It represents a complete Squeak app, that runs from CD-ROM without install. 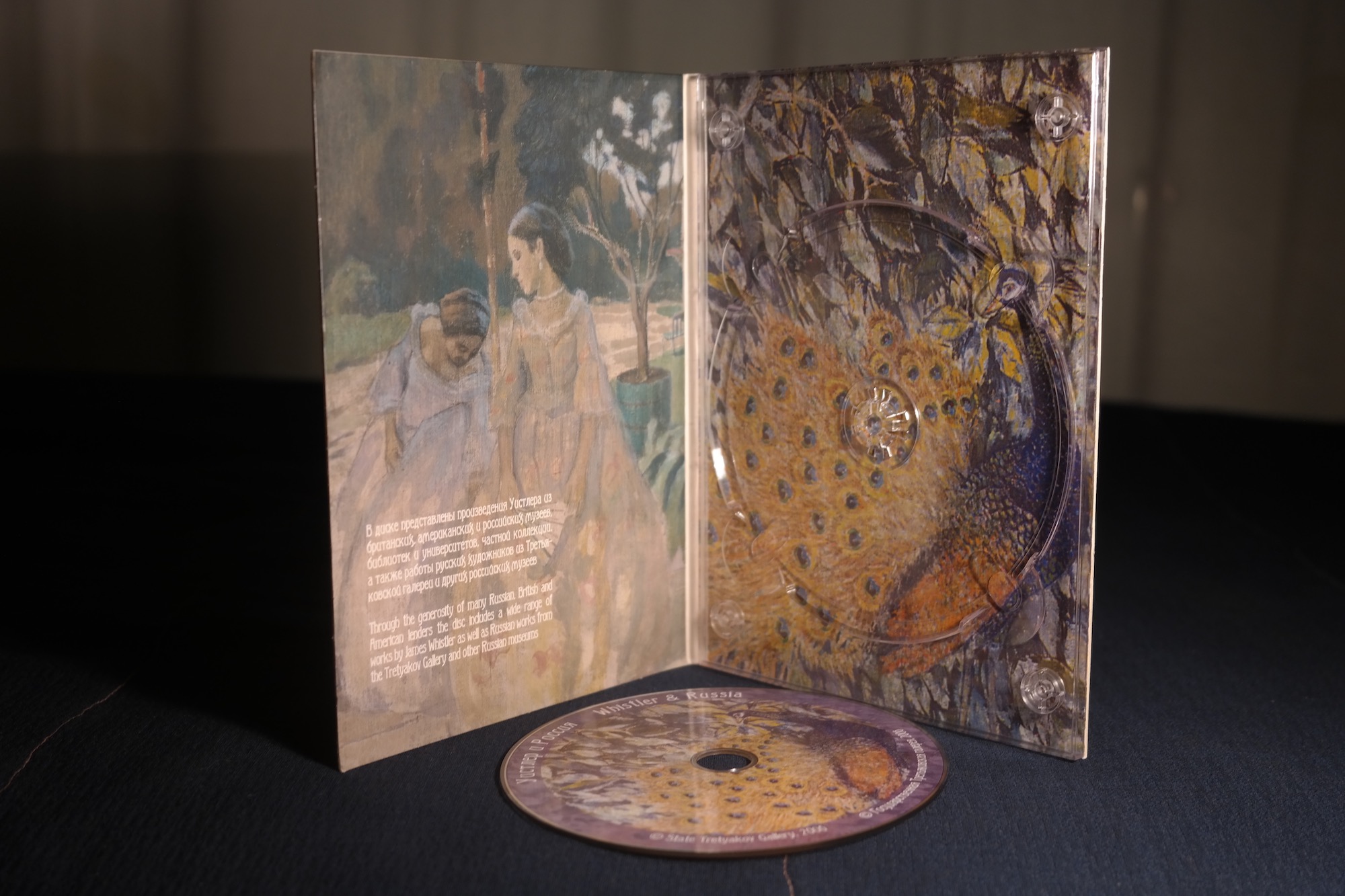 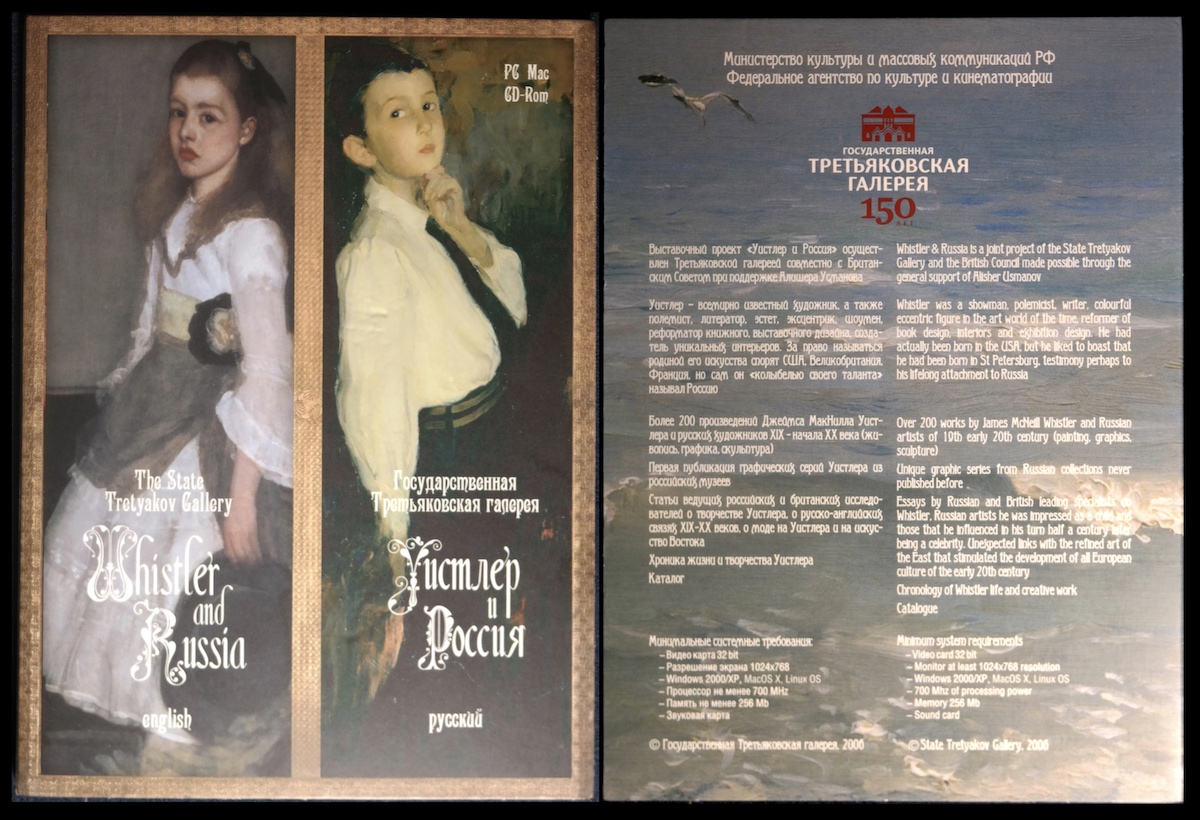 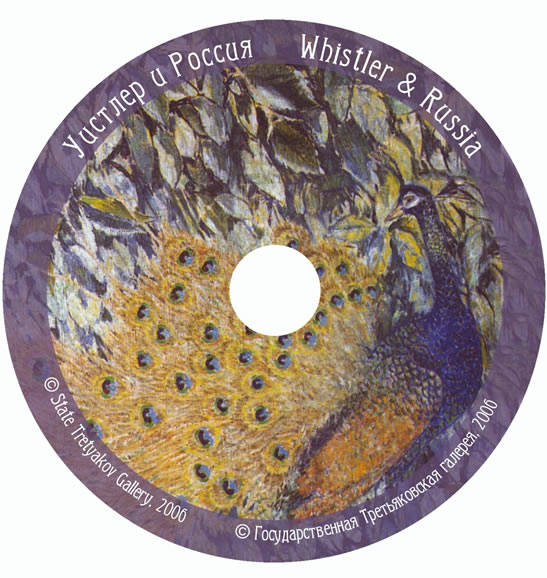 Screenshots from the disc. 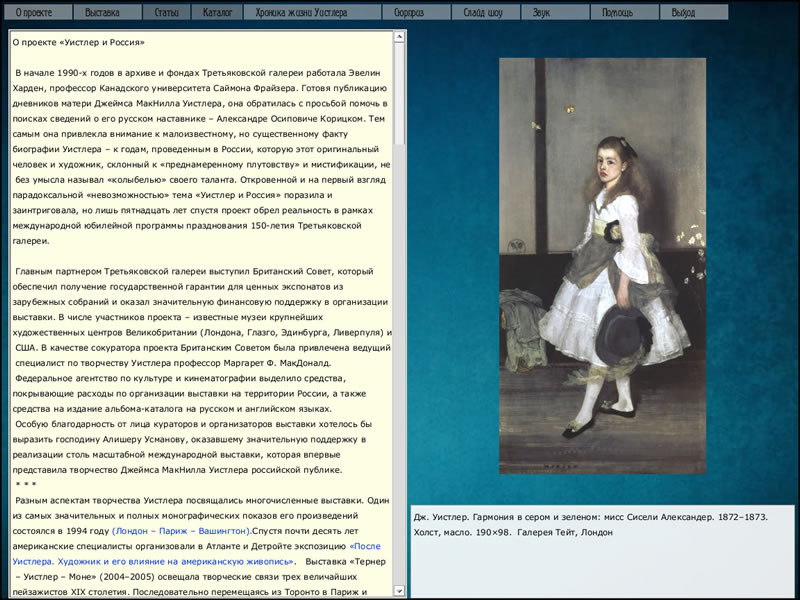 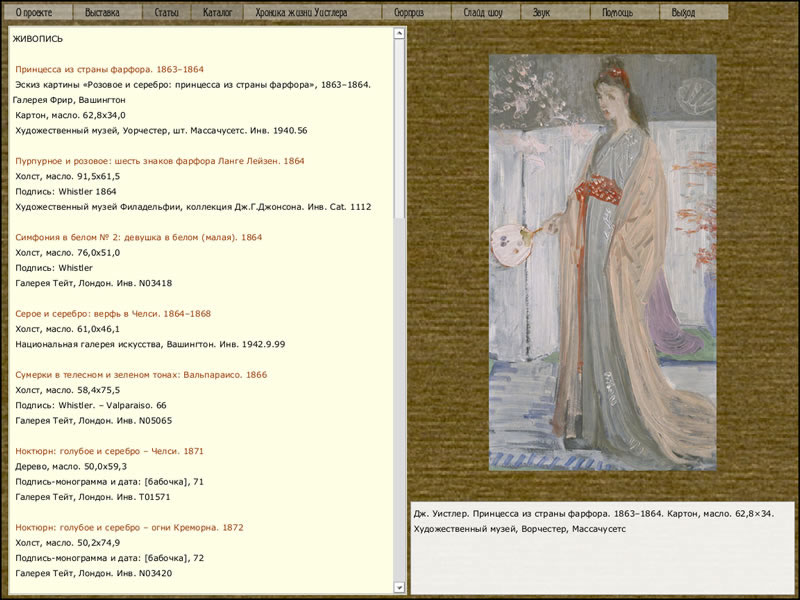 At the same time, there were experiments on building the same disc based on collaborative virtual 3D environment - Croquet SDK. 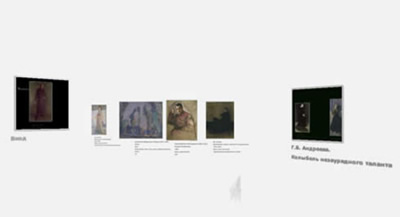